A great way to stay in shape while meeting new people is joining a sport group, and Tel Aviv being a fitness obsessed city has groups for every sport you might be interested in! Most of them are open to the general public, don’t be shy and join one of their practices! Scroll down for a list of our favorite sports groups in Tel Aviv.

Ghetton 5-a-side soccer league – A sport network with 1000 players in Italy and Israel. Israel’s Got Rugby! – Rugby group that organizes various activities for men and women.

Tel Aviv Amazons – Women Rugby. A competitive, fun loving team looking to recruit players of all shapes and sizes. No one is too small, too big, too thin, too fat or too anything to play rugby! Training is twice a week (Sun & Wed, 19:00-21:00) at the TAU sports center. 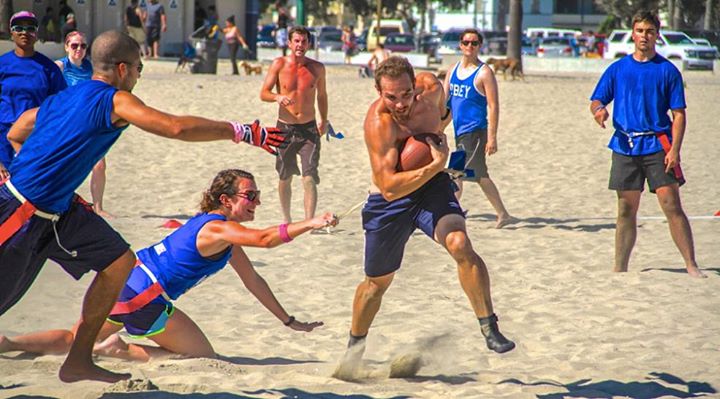 Israel Field Hockey – An intramural co-ed indoor field hockey team. We are a group of Israelis and internationals who come together to play hockey usually on Saturday evenings and compete in outdoor field hockey in the Maccabiah Games every 4 years! All levels of experience are welcome and don’t be shy even if you haven’t touched a stick in years or are a first time player!

Baseball and Beer – Here’s the deal. Every other weekend, we’ll be having a mini-baseball tournament at Park Hayarkon. It’ll be soft toss, overhand, from behind a pitching screen.

Tel Aviv Netball – A Netball group for everyone who wants to play, whether you are a great player, an ex-player (the last time you thought about netball was sometime around primary school!) or someone who wants to learn a new sport.

Israeli Baseball Association – A network of coaches and players throughout Israel to: Teach and coach baseball; run teams in 5 leagues from ages 6 to adults.

Tel Aviv Beach Volleyball and Picnic – This group is used to organize and schedule beach volleyball games usually at Gordon Beach, Tel-Aviv. They also have picnics once in a while, everyone is welcome!

Tennispro Tel Aviv – A group for finding Tennis partners in the Tel Aviv area, schedule matches and even participate in tournaments! Leeor’s running group – A free group that was founded for the love of running.

Chess on the Boulevard  (Yehudit!) – We are an open group, initially helped by the Angels of Rothschild Chess group (they meet on Tuesdays on Rothschild)- to enable chess on Sderot Yehudit for free from 7pm until late. Anyone can come- just turn up with a smile – All levels.

Play Me TLV – Boards Game Group – For those who like or miss Pictionary, or Risk, Connect 4, Monopoly or any other game and want to chill with other like minded dweebs.

Looking for something in particular? Click here for all fitness groups, classes and trainers in our Business Directory